Some might look at the above title and blow on by it, thinking nothing of where this simple device might have come from; giving in to it’s just another fad. Well, I wanted to look at some early days and came across a pictorial history of the smart watch history as recorded by those working in and around the device.

As I post these images, most of them come from internet image galleries that saw fit to record and pass this information along some important/unimportant dates and times that smart watches recorded for advancement to be made later.

NOTE: 1941: Mimo Loga is introduced as the first “smart watch”. It was considered smart because it offered enhanced functionally above telling time I the form of making calculations using the hour and minute hands (don’t ask me how). 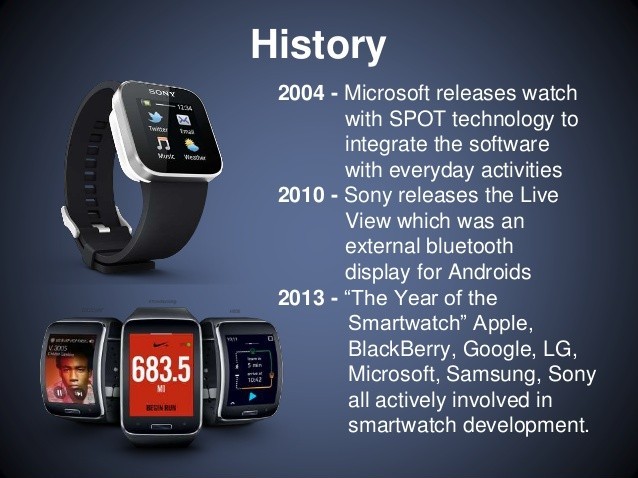 So for starters, 1982 players list read: Pulsar, Seiko, Timex, Fossil and IBM (once known as Big Blue). As you glance over the list of early players, one might say they never heard of some of these companies or knew they were into smart watch market. Of this list, we find only Samsung being a known active player in today’s current market.

We see the name “Timex” in this list, a once formative contender in the wrist watch market. Some may have even considered them the working man’s watch, carrying a tagline: “Timex, it takes a licking and keeps on ticking” for its durability. They did make a return in 2015, shipping their first cellular equipped smart watch.

Another thing that I would point out here is that as a highlighted feature is mention for each device, that was about all that each of these early devices would do. One might thing that the smart watch history would be full of multi-functional functions, but they just weren’t. This is what development of this device started seeing its growing pains. 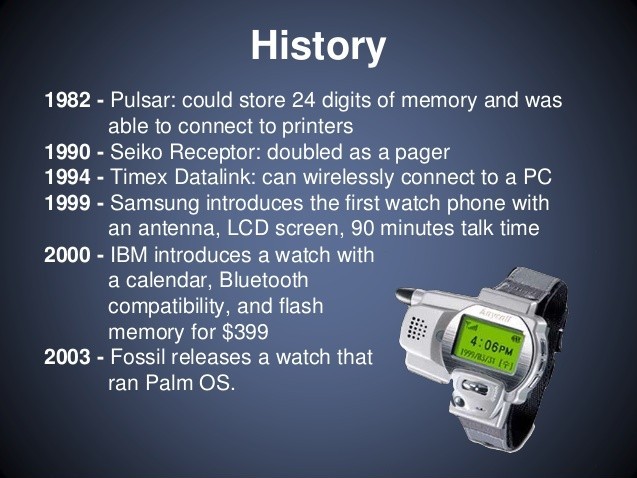 Next the term “wearable” was kicked around to see how it would be accepted in the market and how to address it with the smart watch. This timeline shows that the term was around as early as 2008.

As technology advances and designer were able to make smaller, cheaper and faster computer parts, motherboards and processing chips, designers saw smart watches emerge into extensions, or remote controls, of out smartphones. In additions, these advancements allowed for a sleeker and more fashionable designed to be created.

Today, there are dozens of companies that offer fitness watches, many of them offering built-in GPS. as well as smart watches with and without built-in cellular functions.

The concept of a wrist-worn communications device has not changed in decades, as seen above, but the advancement in the technology has and will continue to advance.