Wearable technologies are out there and have been having some growing pains as with anything takes off faster than predicted. Many of the major players, tech companies seem to have jumped the gun before the hardware was able to catch up with the initial design. Where have we heard that statement before?

With the inter working of solid state components becoming smaller and more efficient, the one main problem persists, bad battery life or device being to large will not go away and will be every sought after for wearable.

We have learned a new word for this technology that we refer to as wearable. The wearable market consists of more than just smartwatches. Yes, we have technology that comes in a number of different shapes and sizes all while not standing out to the casual observer. 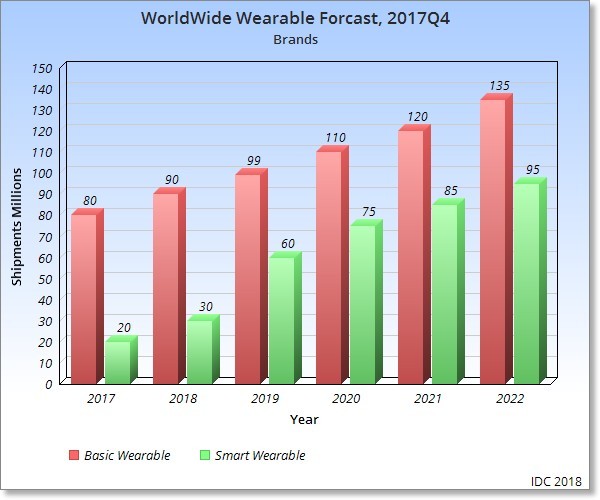 NOTE: In a report from the IDC, their data shows shipments of wearable devices are on track to grow 15.1% in 2018.

These wearable come in many forms and categories: Smartwatches, basic watches, basic wristband data, ear wear, clothing, and other. Much like most products that speed of the development table to the sales floor, you will see some divide in the different manufacture community.

Those who have tried to either continue to swear by the technology or have gotten bored with most current platform as it has stagnated of the past few years.

The shift in consumer preferences towards smartwatches has been in full swing these past few quarters and we expect that to continue in the upcoming years as well. While it is Apple will undoubtedly lead in the category, what bears watching is how Google and its partners move forward.

WearOS (formerly Android Wear) has been somewhat of a laggard recently and despite expecting changes to the operating system and the release of new silicon, we anticipate Android-based watches to be Wear OS. Closet competitor due to the high amount of customization available to vendors and the lack of Google services in China.

Here, we will see an increasing amount of market share over the course of the forecast product life. Apple decision to include cellular connectivity on the latest Watch has helped bring some much-needed attention to the smartwatch category. It’s only a matter of time before other vendors begin to include this capability and take advantage of the tech to enable additional use cases.

The primary watch comprised of sport watches, kids’ watches and hybrid watches, are forecast to see a compound annual growth. Though the device offer many advantages such as longer battery life, simplified interface, and highly fashion-forward designs, this category will remain in the shadow of smartwatches as it share declines.

On the rise are the wearable security devices that seem to never go away but never really catch on to the targeted market. These devices currently come with limited options while developers are seeking ways for them to become part of the everyday, uses process. Getting people to have that daily need will be a task for the marking departments to undertake and the designer to conquer.

For now, there are a few products that can be put out front, hitting on 90 – 95% of what consumers desire to be the “complete” wearable today.

Garmin Connect: Some of Garmin devices are made to work with you mobile app. Set up your device to sync date while you are on the go. Models like the Garmin Vivoactive HR https://amzn.to/2Nx9gwy